LOS ANGELES (October 12, 2009) – The No. 5 Iacocca Silver 45th Anniversary Edition Mustang, one of the most anticipated limited edition versions of the renowned Ford Mustang, sold for $352,000, the top price paid for a new car overall at the 2nd Annual Barrett-Jackson Las Vegas auction on October 9.

At approximately 6:30pm PDT, the auction began with a personal video message from Lee Iacocca himself, with cheers from the crowd. As the Iacocca Mustang drove up onto the stage, it was rushed by fans and bidders.

The excitement and enthusiasm for the Iacocca Mustang was widespread throughout Barrett-Jackson Las Vegas, as it crossed the block. After an intense back and forth between bidders, the highly sought after Iacocca was sold to an automotive enthusiast from Colorado, who also won an exclusive dinner with Iacocca as part of the sale.

“This is a stunning, modern day muscle car from the visionary who started it all,” said Steve Davis, president of Barrett-Jackson. “We did something really special.... I am very proud of what we did and I think the effort was reflective of the quality of the vehicle and the man who inspired it. “

The No. 5 Iacocca Silver 45th Anniversary Edition is one of only 45 to be built and is specially-equipped with a 550 horsepower engine.

“I can’t thank Craig Jackson, Steve Davis and their team at Barrett Jackson Las Vegas enough. It was an amazing event and time which will be with me forever. I couldn’t be happier about the outcome,” said Iacocca Mustang designer, Michael Leone. “Tammy Allen, the winning bidder now owns a piece of history. You can’t get much better than that.”

Each of the 45 limited edition Iacocca Mustangs is custom-built by a team of talented artists at the Gaffoglio Family Metalcrafters in Fountain Valley, Calif. The hand-crafted vehicles, all painted in a specially created Iacocca silver hue, are fabricated using the finest tooling. The cars are sold exclusively through Galpin Ford in Southern California, the largest volume Ford dealer in the world.

“The sale of the Iacocca Mustang for $352,000 by Barrett-Jackson shows that American collectors, despite the economy, are willing to spend and spend big for cars that catch their fancy,” said Publisher of Sports Car Market, Keith Martin. “Plus, it’s very likely that the combination of two American icons, the Mustang and its creator, Lee Iacocca, reminded the audience of happier times when American car companies ruled the world.”

The 2009 Barrett-Jackson event took place at the Mandalay Bay Resort and Casino and featured approximately 400 collector vehicles for sale. 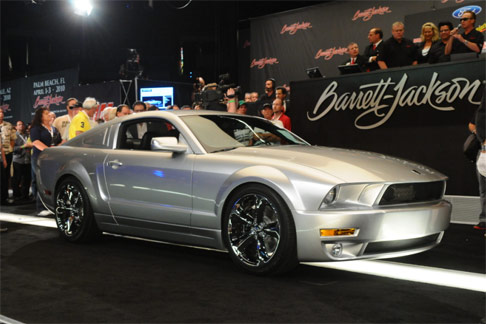